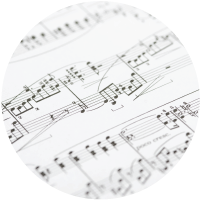 Choral music is an important cultural activity in Waterloo Region, with its Mennonite and German roots.

The Grand Philharmonic Choir traces its roots back to the 19th century, when Kitchener was named Berlin. A defining feature of local life was the singing festival (sängerfest) that attracted thousands of people; this has formed a lasting foundation of appreciation for choral music.

The choir has operated continuously since 1922.  We are now four choirs in one organization: a large symphonic adult chorus, a smaller chamber choir drawn from the ranks of that chorus, a youth choir comprised of singers aged 14 to 23, and a children’s choir for young singers from age 7 to 14.

We produce, perform, and share choral music in and around Waterloo Region. Our offerings range from a formal concert series with professional orchestra and world-class soloists to free, open sing-along opportunities for the public.

In 1972, Howard Dyck became artistic director and continued for another 38 years before retiring in July 2010. Ambitious and visionary, Howard built the choir’s performance standards, artistic ambition and administrative support. When the city’s 1,800-seat, acoustically fine concert hall, Centre in the Square, opened in 1982, it quickly became the choir’s home venue.

The children’s choir was begun in 1985, and the youth choir in 1998. The youth choir quickly became one of the best ensembles in Canada, winning first place in the youth category, mixed voices, at the CBC National Competition of Amateur Choirs.

Mark Vuorinen has been the choir’s artistic director since 2010. He has brought intense focus on performance standards, an innovative approach to programming, and commitment to outreach and collaboration.

Recent performance highlights for the choir include the passions of J. S. Bach, Beethoven’s Missa Solemnis, Britten’s War Requiem, Mendelssohn’s Elijah, and performances as guests of the Kitchener-Waterloo Symphony and Hamilton Philharmonic Orchestra.

The adult choir is one of the few choral performing organizations in Canada, outside the major metropolitan centres, with its own season, featuring performances of choral music with professional orchestra in a professionally managed concert hall.

To find out more about the Grand Philharmonic Youth Choir, click here.

To find out more about the Grand Philharmonic Children’s Choir, click here