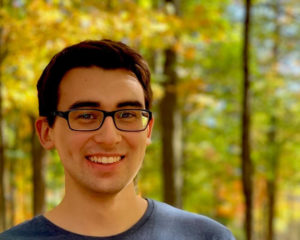 The competition, for Canadian composers 30 and under, attracts entries from across the country. It is designed to support creation of new Canadian music by emerging composers.

Each year, the specified work is for a different choir within the Grand Philharmonic organization: adult large choir, adult chamber choir, youth choir and children’s choir.

Lapierre’s work, “Good Night,” was written for children’s choir and will receive its world premiere on Friday May 8th in Kitchener at a concert featuring the adult, youth and children’s choirs of the Grand Philharmonic organization.

“I enjoy the mood of this song,” said Grand Philharmonic Children’s Choir conductor, Andrea deBoer-Jones, who was also one of the jurors. “It is so lovely right from the first phrase — the syncopated harmonies with the almost jazzy soprano lilt at the chorus. Our kids liked it from the first read, and it suits them so well.”<

Despite his young age, Lapierre’s compositions have already attracted attention through other competitions and calls for scores. His choral works have been performed in London, England; St. Paul, Minnesota; and Montreal.

Locally, his work has been performed by the DaCapo Chamber Choir and Laurier Concert Choir.

Lapierre said he had never written for children’s choir before. When he checked what kind of music they sing, he saw that much of it was playful in nature, and he thought that a more serious tone might be appreciated. He chose text by Joanna Baillie, a Scottish poet and playwright of the late 18th and early 19th century.

Lapierre is looking forward to the Kitchener premiere. “It’s an invaluable experience to hear your own work,” he said.

The contest is judged blind, with the identity of the composers removed from the scores. Jurors were: deBoer-Jones; the Grand Philharmonic Choir artistic director, Mark Vuorinen;  and Canadian composer Kathleen Allan.

As winner, Lapierre receives a prize of $1,500 and an invitation to rehearsals and performances of his work.

It will be performed May 8 and 9 at performances entitled “Choirs in Concert,” 7:30 pm at St. Peter’s Lutheran Church, 49 Queen St. N., Kitchener.

The Grand Philharmonic Choir gratefully acknowledges the support of the Wallenstein Feed Charitable Foundation for this project.

Join us this Saturday evening Nov. 9 at 7:30 for a selection of contemplative works…